While it’s easy to think of Attention Deficit/Hyperactivity Disorder as a childhood disorder, that’s only telling part of the story. Adult ADHD affects a significant portion of the population yet receives very little attention. Just as boys are significantly more likely to receive a diagnosis of ADHD when compared to girls, adult women are less likely to be diagnosed and treated for ADHD. While boys receive treatment, girls are missing out and their symptoms are being left untreated. For about 20-30 years, ADHD in women and girls is often overlooked. Those girls have since grown into adults, resulting in a generation of women whose ADHD is overlooked or undiagnosed. Without treatment and support, their symptoms persist and women suffer. It’s time to pay attention to adult ADHD.

As is the case with most mental health disorders, adult ADHD doesn’t look exactly like childhood ADHD. Below is a list of common symptoms of adult ADHD. However, if you find yourself identifying with many of these traits, make an appointment with your PCP or a therapist for more clarification. Check out the Mayo Clinic’s page to learn more. 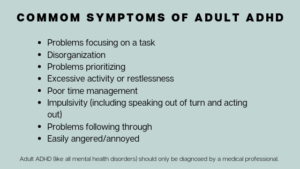 You are probably thinking, doesn’t everyone experience all of these things at one point or another? The answer is yes. The difference between a normal about of distractibility and ADHD is in three things: severity, duration, frequency and impact. In other words, how bad is it, how long has it been this bad, is it always this bad and how much do you suffer.

The Misdiagnosis of Adult ADHD

The symptoms of ADHD are likely to remain present well into adulthood if left undiagnosed or treated in childhood. People find ways to cope, work-arounds, and habits that can reduce the impact of their symptoms. Sometimes, what seems like a childhood quirk or an adolescent personality trait is actually a mismanaged symptom of ADHD. For example, interrupting people is super annoying, but for some people, impulsively speaking over someone else is something more. If you’re an adult and you are still talking over other people and you find it difficult to stop, you should consider ADHD.

Additionally, female behavior described as ‘flighty’, ‘aloof’, or ‘having her head in the clouds’ is actually describes ADHD symptoms, but those descriptions seem to blame the women. In women, distraction is more likely to be misinterpreted as representative of her intelligence. Silent symptoms don’t draw a lot of attention but definitely create barriers. For example, struggling through a to-do list or finishing a project. Recognizing adult ADHD in women is challenging.

What You Can Do About Adult ADHD

The good news is that there are ways to reduce the impact of your symptoms! First, you should talk to your doctor or therapist to determine if ADHD is really what’s going on. Next, you should read, research and explore trusted books and sites for more information and options. A combination of therapy (specifically Cognitive Behavioral Therapy) and medication (often a stimulant) is the most effective treatment. However, if you aren’t into therapy or are anti-medication, each treatment can be very effective on it’s own.

Snack Board Ideas for Kids: The Perfect Quarantine Meal

A Reminder: It’s Okay to Not be Okay Right Now

My 3 Secrets of Personal Care

Seacoast Moms Blog - July 15, 2020 0
We are thrilled to announce our (Virtual) Seacoast Moms Speaker Series on Race! After the murder of George Floyd, we at Seacoast Moms are taking...

3 Seacoast Nature Walks Where You Can Dip Your Toes in...

Directory Of Black Owned Businesses on the Seacoast