Dropping my children off at school feels heavy these days. Their safety is always my priority and this year feels especially hard. The other day, as my masked daughter leapt from our car to get her temperature taken, I had a flashback. I remembered a scene from years ago in my education career when our fears weren’t CoVID-19. My déjà vu gave me an image of a similar movie set-like scene. I remembered adults welcoming children and trying to create a sense of normalcy. There was a “we got this” bubble. Those were the days we returned to my school after the horrific bombing in Boston on Patriots Day.

My school was one city block from the Boston Marathon finish line. Like most U.S. schools in 2013, we held lock down drills and practiced procedures for active shooters. After the Sandy Hook massacre, we administrators approached school safety with a new intensity. Then we experienced the unthinkable. The days and weeks following the bombing were nothing short of a nightmare. We returned to school before the police captured the bombing suspects. In those few days, I saw shell shock and fear on too many faces. The neighborhood of Back Bay felt foreign and dangerous. A handful of our students experienced psychological trauma after the bombing, and our work immediately extended beyond their school learning.

Here we are today, living through a different kind of “unthinkable” on the Seacoast of New Hampshire. But my thoughts still go back to those days. Given the status of 2020 (a common descriptor is “dumpster fire”) and the upcoming elections, I needed to learn more about gun safety and NH schools. Did I know all the facts?

Do you know that a person over the age of 18 can lawfully carry a gun into any New Hampshire school?

I recently learned this and my brain hit the “wait, what?!” short circuit button. Educating myself about gun safety and NH schools is critical since I have three children in the school system. But let me back up a second.

Let’s Start with the National Picture on Guns in Schools

Two federal laws attempt to keep K-12 schools gun-free. The Gun Free Schools Act of 1994 prohibits students from bringing a gun into a school. It requires all states receiving federal education funds create a state level version of the act. This came shortly after the Gun Free School Zones Act (GFAZA) in 1990 which prohibits the open or concealed carry of a gun within 1000 feet of a school. But there’s a loophole: GFAZA doesn’t apply to anyone with a gun license.

If you have a license, you can bring your gun into a school in many states.

In response, many states have closed this loophole by creating a state level version of GFAZA.

NH is not one of the states that closed the loophole regarding GFAZA. In August of 2019 Governor Sununu vetoed House Bill 564. This bill would have prohibited guns on school property. He argued that New Hampshire has a culture and history of responsible gun owners, therefore our laws do not need any revisions. 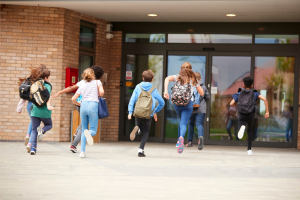 It’s challenging to find a parent who does not prioritize safety. Why else do you spend hours researching the best car seats or cutting up grapes into tiny pieces? There’s a market for baby ankle monitors, and apps that act like invisible leashes on our teens. But the fact that our kids can go to school, and have a person legally enter with a gun unnerves me.

Other facts to know about Gun Safety Laws in New Hampshire:

There are several federal restrictions on gun purchases. For example, convicted felons and persons deemed “mentally defective”, may not legally purchase firearms. However, in NH, mental health records are held confidential- they are not provided to the national database used to perform background checks. Fortunately, support is still enthusiastically present for common sense gun laws in schools. Some NH schools have passed policies that prohibit guns on school grounds. If a person enters a school with a gun, they may be asked to leave. If said person refuses, they can be arrested for trespassing. 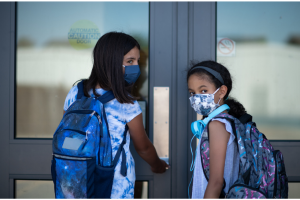 One of the reasons we moved out of the city to the Seacoast was to prioritize safety. In many ways, I know my children are safer here on the Seacoast, particularly when it comes to the current CoVID rates. When my daughters ask questions that I do not know the answer to (yesterday it was “mommy, what is just above the clouds?”) I search for facts to explain, to help them learn. Often, I am the one learning too. 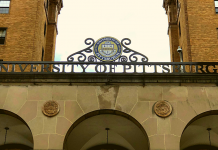 5 Life Lessons I Learned from My First College Drop Off 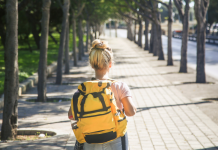 A Teacher’s 5 Tips to Prepare Older Kids for School 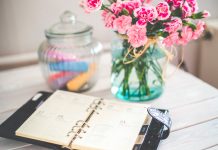 5 Fall Essentials to Survive Back To School This Year

Lindsey - January 18, 2022 0
The only way for me to get through the long winters we experience on the Seacoast is to get outside. Summer days make it...

The Seacoast Summer Camps Directory: Your Guide to Summer

Perinatal Yoga on the Seacoast with Nicole Lambert

Seacoast Gift Guide for The Outdoorsy Person on Your List

ABOUT US
Seacoast Moms is a locally-focused parenting resource for moms and families. Passionate about parenting and our community, Seacoast Moms strives to connect area moms to relevant resources, local businesses, can’t-miss happenings, and most of all — each other!
FOLLOW US
© Seacoast Moms© - 2022
Sister Site at City Mom Collective.